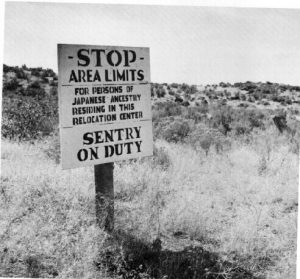 We cannot shut our eyes to the fact that, had the petitioner attempted to violate Proclamation No. 4 and leave the military area in which he lived, he would have been arrested and tried and convicted for violation of Proclamation No. 4. The two conflicting orders, one which commanded him to stay and the other which commanded him to go, were nothing but a cleverly devised trap to accomplish the real purpose of the military authority, which was to lock him up in a concentration camp. The only course by which the petitioner could avoid arrest and prosecution was to go to that camp according to instructions to be given him when he reported at a Civil Control Center. We know that is the fact. Why should we set up a figmentary and artificial situation, instead of addressing ourselves to the actualities of the case?

These stark realities are met by the suggestion that it is lawful to compel an American citizen to submit to illegal imprisonment on the assumption that he might, after going to the Assembly Center, apply for his discharge by suing out a writ of habeas corpus, as was done in the Endo case, supra. The answer, of course, is that, where he was subject to two conflicting laws, he was not bound, in order to escape violation of one or the other, to surrender his liberty for any period. Nor will it do to say that the detention was a necessary part of the process of evacuation, and so we are here concerned only with the validity of the latter.

Again, it is a new doctrine of constitutional law that one indicted for disobedience to an unconstitutional statute may not defend on the ground of the invalidity of the statute, but must obey it though he knows it is no law, and, after he has suffered the disgrace of conviction and lost his liberty by sentence, then, and not before, seek, from within prison walls, to test the validity of the law.

Moreover, it is beside the point to rest decision in part on the fact that the petitioner, for his own reasons, wished to remain in his home. If, as is the fact, he was constrained so to do, it is indeed a narrow application of constitutional rights to ignore the order which constrained him in order to sustain his conviction for violation of another contradictory order.

I would reverse the judgment of conviction.

5. The italics in the quotation are mine. The use of the word “voluntarily” exhibits a grim irony probably not lost on petitioner and others in like case. Either so or its use was a disingenuous attempt to camouflage the compulsion which was to be applied.

8. My agreement would depend on the definition and application of the terms “temporary” and “emergency.” No pronouncement of the commanding officer can, in my view, preclude judicial inquiry and determination whether an emergency ever existed and whether, if so, it remained at the date of the restraint out of which the litigation arose. Cf. Chastleton Corp. v. Sinclair, 264 U.S. 543.