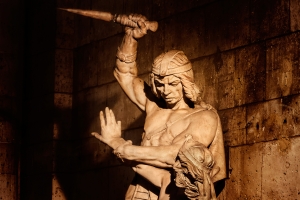 The third definition is the Texas codification of the traditional common law concept of “felony murder.” It is unclear why the second and third definition were needed, as they are very similar and intending to cause serious bodily injury is usually felony aggravated assault. The legislature must have wanted to make sure it covered every ground, especially when seats on death row could be at stake. Nevertheless, the third definition requires that a person be committing any felony, from first degree drug distribution to state jail forgery of a financial instrument (such as a check), yes any felony qualifies. At common law, the felony murder rule, as it was harsh, was often limited to felonies “a fortiorti”, i.e. serious felonies such as robbery, arson, burglary and others clearly dangerous to human life. One of the harsh consequences of felony murder is that, under liability as a party to a crime, it often can be charged to any participant in the underlying felony, making one who had no intent of hurting or killing anyone criminally liable for acts of another that resulted in murder. The typical situation is a “robbery gone bad” in which one robber of three shoots the store clerk. All three are on the hook for capital murder. But, felony murder is now also used in DWI cases, in which the felony of DWI3rd is being committed by the driver who has been twice previously convicted, as they are also committing an act dangerous to human life, driving intoxicated, during the commission of the underlying felony of DWI3rd.