Ahmed Mohamed recently became an international celebrity by being detained by the Irving Police on suspicion of a hoax bomb at school. Mr. Mohamed brought a “rearranged” clock to school in a carrying case which reportedly looked suspiciously like a bomb or bomb detonating device. In the post 9-11 world, things are taken far more seriously, and it was probably a questionable idea to bring the clock in its condition into class without an up-front talk with the school, but such are the minds of 14 year olds. 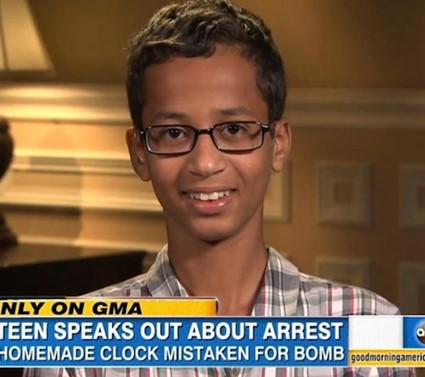 From the Iraq war, it was learned that items as small as cell phones or even garage door openers could trigger large bombs which killed Americans. Teachers and administrators were alarmed at the look of the clock device, and called in police. They claimed Mr. Mohamed was evasive with questioning, and was detained on suspicion of a hoax bomb.

Nationally, the case is being used as a hot point to debate the fear or profiling of Muslims by law enforcement. But, the case could actually come down to a poorly written statute and miscommunication by the student to the school. Ahmed by all accounts is a bright and curious kid who likes to tinker with such things as clocks and electronics. His creativity should be encouraged and supported. But, is this another “example” of “Islamaphobia in Texas” for a child to be detained and questioned regarding the improvised or rearranged clock, or would any child regardless of religion or creed be detained for such a “suspicious looking device”? The school district is not allowed to comment on the contents of the questioning. So, without a court case which does not appear forthcoming, there will likely be no record. However, the student’s family has hired a lawyer for a potential civil rights case which may develop the facts more coherently.