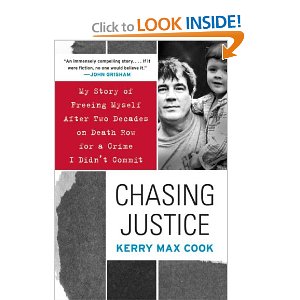 The case of State of Texas v. Kerry Max Cook, the twenty year series of trials and appeals in which the State of Texas through the Smith County District Attorney’s Office (Tyler, TX), continually lied, knowingly presented perjured evidence, and did everything evil that rogue prosecutors are able to do, is a tale of one brave individual who survived it all and lives to tell about it today. Tried in 1978 and convicted on the false testimony of a jailhouse snitch, whose motive for testifying – a 2 year sentence in his own murder case – was withheld from the defense, who was personally coached by the prosecution into testifying to a detailed false confession, together with a false opinion of a state “expert” who claimed to be able to judge the age of fingerprints on a door, and the hiding of evidence by the prosecution of exculpatory evidence including evidence that Kerry Cook had been invited to the victim’s apartment three days earlier (which explained his fingerprints), were all part of an evil recipe to convict and kill a young boy for the sake of prosecution politics and statistics. Justice be damned.

I wish I could tell you the entire story, but instead I encourage you to read the story of Mr. Cook as only he can tell it, in his book Chasing Justice. It details the investigation and defense of his case, and the sordid details of life on death row as a young boy from East Texas. Mr. Cook vividly details being sexually assaulted in prison and life in Texas prisons in the late 70s and 80s. His appeal sat on the dockets of the Texas Court of Criminal Appeals (where death penalty appeals are directly sent to speed up the killing process), for eight years. Yes, eight years went by before his first appeal could be heard and he could proceed to the United States Supreme Court. Although the Dallas Morning News and other investigative journalists tracked down the “jailhouse snitch,” who admitted that his testimony was a total fabrication.