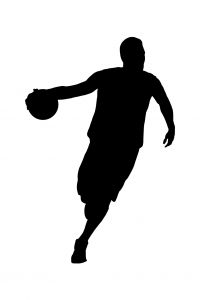 My two oldest nephews and six of their friends came out and wanted to learn basketball, and drew me as their coach for better or worse. I felt bad when I was too hard on them at times (although I was too easy at others), but they all gave a ton of effort for three months and became one unit. Before our first game, only one had really experienced winning basketball to my knowledge, but by the end they had each taken part in a winning season and we had all advanced tremendously experience-wise. My defensive pride made me teach them man to man defense, which is particularly difficult at a young age due to its requirement of divided attention. In man to man, kids must master focusing on the ball and on their man, never losing sight of or position in relation to either. To see them play this defense very, very well for their age by the end of the year was a real blessing. Along with mastering other parts of the game, it showed how hard they worked and how serious they took basketball. I hope they continue to do so, as they have the foundation talent wise to be very special throughout their school years.
The thing I wish I could have done better this year was to relate more to the kids on their level. I took a “Hoosiers” approach to coaching, as that is the only style I have seen work well consistently in basketball. Sometimes I tried coaching them too much like high schoolers and not like the young kids they were, but for the most part they responded positively to what I was teaching and why I did what I did. Hopefully they learned as much as I did this season.

In life, what I learned on the basketball court has had a whole lot to do with becoming the lawyer and person I am today. I hope these kids learn the same lessons about success and overcoming adversity. The hours of basketball practice and the hard work in the weightroom made a huge difference on the court, so I learned the value of hard work early. I also learned the power of focusing on doing a couple things – defense and rebounding – really well, and that it would dramatically improve the team and my value to the team. We are all role players in our several stations in life. In my law practice, I still focus on doing the everyday, hustle plays, as well as I can. There is no substitute for hard work and preparation in any given career, especially preparing cases for trial. Also, in basketball anyone can win, especially if they give the effort, particularly when an opponent underestimates you, doesn’t prepare well for you, or doesn’t adjust to the things you do well. Victory is often just a little hard work and a few good decisions away.