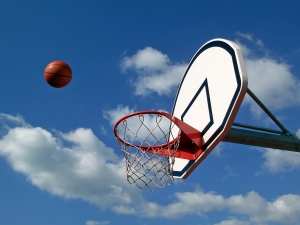 This year I had the privilege of coaching eight young men in 5th and 6th grade basketball. I thought that I would descend from the clouds and teach them everything there is to know about basketball, but I believe that I learned a whole lot more about coaching, teaching and humanity through this experience than I was probably able to give back. It was very special to see eight kids learn how to play as one unit, play for each other, and overcome adversity and the ups and downs of a serious basketball season, eventually firing on all cylinders together up and down the basketball floor. This was a special group of kids and part of a special class group at their small town school, and they will achieve big things in the future.

Although I have strayed from the game, basketball was my passion in high school and going into college. I was fortunate to be a part of a special class group at Howe that included some very talented basketball players, and was blessed myself with the gift of height (although I would have appreciated some athletic skill to go along with it). I went from a very skinny 6′ 3″-6′ 5″ sophomore and junior (6′ 5″ 165 to be exact, kind of like a stick of spaghetti), to being a more rounded 6′ 8″ senior. What I lacked in weight and athleticism, I had to make up for in hard work and discipline, the latter always being toughest at that tough age. I focused on rebounding and defense, and went from being a bench player to getting a few (very, very few) college looks and having some potential to play at the next level. Fortunately, my academics were always well ahead of my athletics, and I did far better at A&M scholastically than expected. So, basketball became history as I pursued my law career.

I had forgotten much of my love of the game and the reasons I loved basketball so much. One thing I loved is that in basketball, effort is a force multiplier. My competitive nature means that effort is usually not in short supply. While effort can help some in baseball (my first love as a kid), mostly in preparation, baseball is a one-on-one, linear skill sport. You either have it or you don’t. I gave a lot of effort in baseball and did well at a young age, but I quickly grew too tall and skinny to play my beloved catcher position. In football, effort goes a longer way, but it is still very much eleven players playing one-on-one with the guy lined up to attack them. In basketball, five players must learn to move together in harmony as one unit, and it almost becomes like music to see true team basketball.