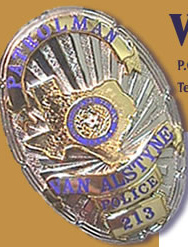 Concerned citizen Jim Wolfe wrote a tart letter to the editor of the Sherman Herald Democrat that he is “Fed up with Van Alstyne police”. I found the letter amusing as the most complaints of any small-town department that I know if in north Texas come from Van Alstyne. They definitely have a very aggressive police department, which apparently almost all of the readers of the Herald Democrat prefer, individual rights be damned.

Apparently, at around 2:00 in the morning Mr. Wolfe was working at his place of business when someone set off the alarm. He checked on the disturbance and someone flashed a light in his face blinding him. He was interrogated by an officer who claimed that dispatch had reported a “suspicious person” (Mr. Wolfe did not inform of his race or exact location).

Mr. Wolfe warned that citizens may be forced to use the Castle Law to his benefit, which allows Texas citizens to shoot an intruder into their home if they are in their home and did not provoke the intrusion and were not committing a crime themselves at the time. He states “an attempt to do an illegal search causes constitutional scholars to frown and Texas laws might turn this into a catastrophic event…” and that “[t]his episode is just another example of the many acts of harassment that citizens of Van Alstyne seemingly are expected to endure. How long are we as citizens of this town going to tolerate this type of treatment?” We don’t know, Jim, we just don’t know.

Glad one citizen and business owner is brave enough to let his voice be heard. I see a lot of citations in his future.